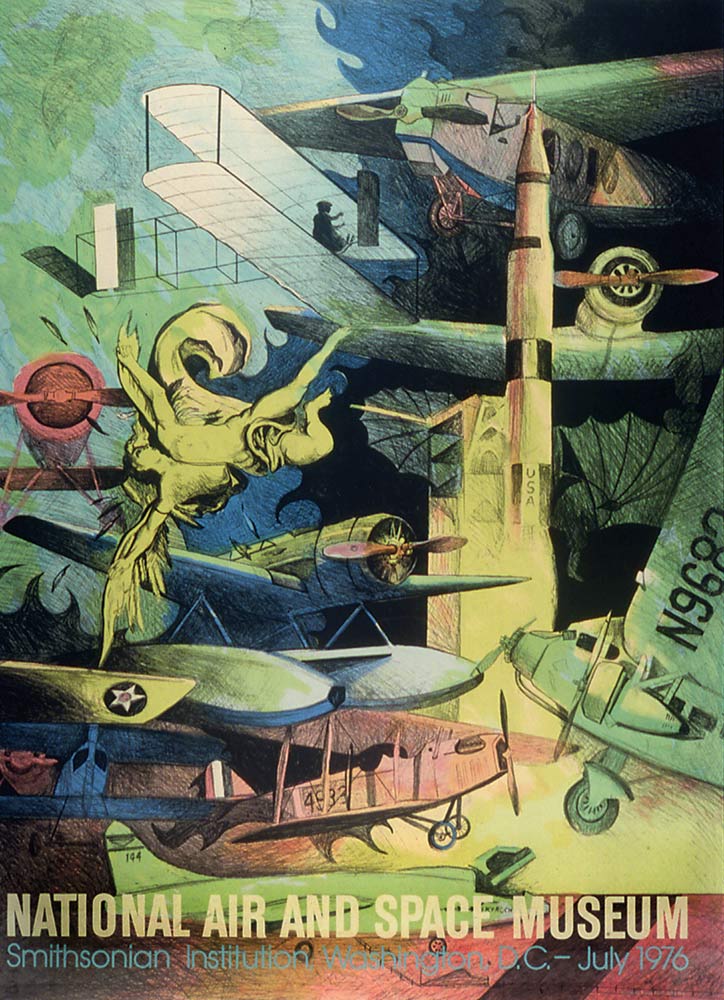 In this artwork commissioned to celebrate the opening of the National Air and Space Museum in 1976, Nesbitt chose to chronicle the history of flight from the fall of Icarus in Greek mythology to the first Apollo flight to the moon. Most of the planes can still be seen in the main gallery of NASM, notably the Wright Brother's first plane, and Lindberg's Spirit of St. Louis.

The first edition of this print was made in only four colors. By using the same lithographic plate, Nesbitt was able to change the mood of the work by adding seven more colors to this second print.

Lowell Nesbitt (1933-1993, Baltimore) attended the Tyler School of Fine Arts and Royal College of Art in England, and taught at Towson State University, the Baltimore Museum of Art, and the University of Miami. A painter and a sculptor, he received many awards, including from the Baltimore Museum of Art and the National Collection of Fine Arts. Nesbitt's works are owned by the National Gallery of Art, the National Air and Space Museum, the Museum of Modern Art, the Fogg Museum, and countless others in the U.S., New Zealand, and France.

He exhibited at the Whitney Museum, and had one-man shows at the Corcoran Museum, the Museum De Bellas Artes, San Juan, Puerto Rico, the University of Rochester, as well as many other galleries. The United States Postal Service issued four stamps based on Mr. Nesbitt's floral paintings. He also served as the official artist for the space flights of Apollo 9 and Apollo 13.