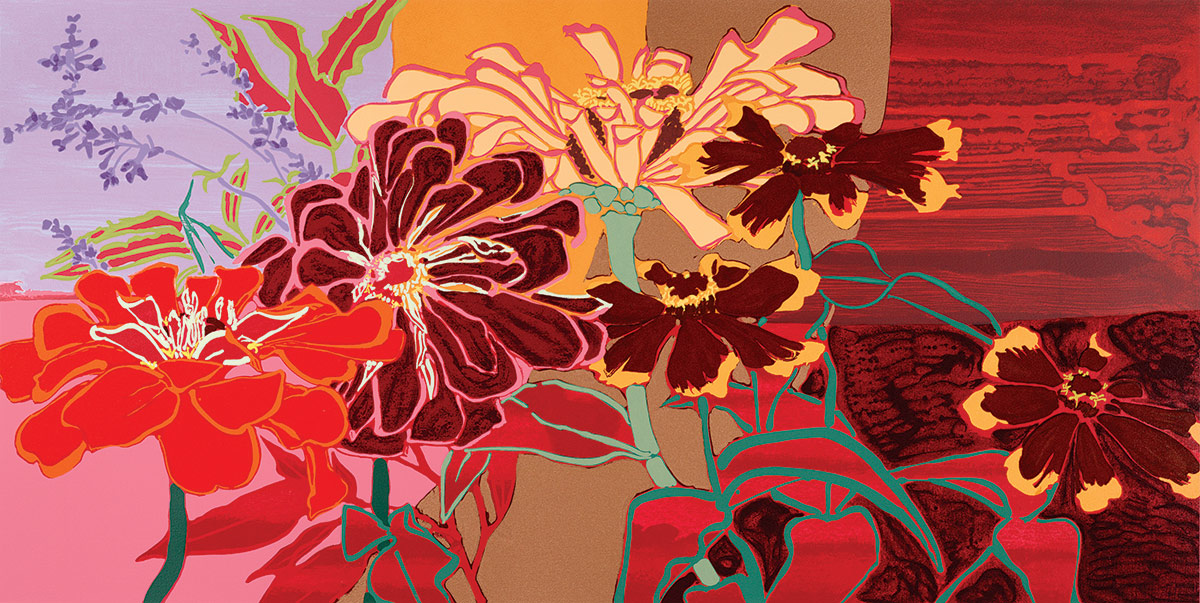 Click or tap image for a larger version.
Zinnias is a reflection of Kushner's love of flowers, which have been his exclusive subject for the last decade. The warm color harmony catches the vibrant hues of red, orange, green, and brown and is complemented by the use of metallic copper. With the dynamic use of lines, Mr. Kushner makes the flowers appear alive, as if they were right before you. In Zinnias, Mr. Kushner synthesizes influence from European and American Modernism (such as the work of Edouard Manet and Georgia O'Keeffe), as well as from traditional Chinese and Japanese painting. Vivid, lavish, and optimistic, Kushner's work conveys directness, honesty, and spontaneity.

Born in 1949 in Pasadena, California, Robert Kushner received a BA from the University of California. It was not until 1987, after 17 years of a full and varied art practice, that Kushner began to paint with oil on stretched canvas. He approaches painting with the same delight, adventurousness and humor that have been characteristic of his work from the beginning. He is an internationally recognized painter, printmaker and sculptor and has exhibited widely since 1971. His work has appeared at the Whitney Museum of American Art, National Gallery of Art, Los Angeles County Museum of Art and The Brooklyn Museum of Art.

Special Information: 20-color serigraph, numbered and signed edition of 150 printed on Coventry Rag. Sold unframed. Comes with a certificate of authenticity from the Smithsonian.

Produced By: Brand X Editions
Back to gallery list